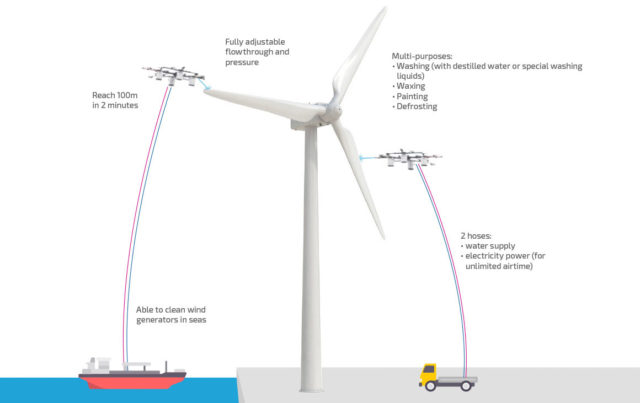 Drones are increasingly being adopted for uses outside of recreational and photographic endeavours, and the new offering from manufacturer Aerones demonstrates just that.

The Latvia-based company has developed its “heavy-lifting” drone for use in de-icing, cleaning and maintaining wind turbines.

[Read more: A drone flew through a fireworks display, and the result is breathtaking]

The company says the machine, which is tethered to a truck on the ground – or a boat if at sea – is capable of cleaning 10 wind turbines per day with “no component spoilage”.

Aerones say the drone has an unlimited flight time because it is powered by electricity from the attached cable, as well as a ground-based water supply to clean and de-ice the blades. The drone can also transport cleaning and anti-freeze fluids.

A nozzle targets the blade and directs the fluid towards it, while the drone moves around in various patterns to cover the entire surface area.

It also features three parachutes which “eject automatically” if it starts to freefall, a radar to detect surroundings, a stabilisation system to ease piloting in harsh conditions, and a thermal and RGB camera.

Janis Putrams, Aerones chief executive, said: “The water is also pumped from the ground and we can use plain water, hot water or distilled water.

“We can also add cleaning solutions and anti-freeze liquids, but in any case we only use non-hazardous and bio-degradable chemistries.

“On the ground, there is a truck or a trailer that has all necessary equipment.

“There is no need to connect anything to the wind turbine so the truck would have a landing and takeoff platform for the drone, it would have an electricity generator, and a high-pressure pump.

“In the future, we plan to do more software automatisation so actually, one person could do it or eventually, it would become completely autonomous and there would only be a central monitoring office that could monitor all the drones around the world.”

Keeping wind turbines clean can increase their efficiency by as much as 20%, Aerones said on their website. The drone removes the high risk involved in using climbers to clean the turbines.

The company is looking at other applications for the device, including firefighting and human rescue.

Putrams said: “Right now, we plan to start with cleaning and de-icing of wind turbines because we have the technology and we really see the benefit that we can bring.”

Whether you love having the current tech, hate cleansing or you’re not as mobile as you as soon as were, robot vacuum are an enjoyable way to obtain a rather dull household chore done. And they definitely look excellent but with the most pricey one we checked costing 8 hundred quid, it deserves understanding precisely what you’re getting for your cash prior to you invest. They do not claim to be as good as your standard family vacuum cleaner when it concerns suction and dust capacity, so if that’s all you care about it may be much better to buy a great Buy now 2. Eufy Robotic Vacuum RoboVac 11: ₤ 219.99, Amazon A more youthful brother or sister to electronics brand Anker, Eufy has produced a fairly priced robotic vac that is definitely one to think about. Its basic, classy design indicates it does not keep an eye out of place in a contemporary house and it’s simple to set up and use. Connect the sweeper brushes below the device and charge utilizing the docking station. Then change on and utilize the remote (batteries not consisted of) to set up the cleaning mode you want– pick from vehicle, arranged, area tidy, edge clean (for skirting boards), optimum tidy (much like turbo)or single room tidy. There are no devices such as virtual walls but there are two replacement sweeper brushes. The robotic works by bounding along the flooring(it almost looks like it bounces)till it detects a wall or furniture piece, after which it will alter direction. The suction is great, whilethe side sweepers do an impressive task at gathering additional dirt. The most outstanding part is that it barely makes a sound-you can quickly watch the TELEVISION or chat while it gets to work. It’s a fantastic choice if you wish to check out the world of robotics without investing excessive. Buy now 3. Airplane Vacuums Pilot Max Robotic Vacuum: ₤ 271.44, Amazon We think this one wins when it comes to appearances. The smooth and compact white style would fit perfectly in contemporary homes and shouldn’t take up a great deal of area either. It comes with sweeping brushes that stand out the side to sweep in and suck up dirt in corners, which is fairly efficient. And it’s extremely quiet, so will not disturb you if you’re seeing TV. It also includes a virtual wall, so you can obstruct off areas you don’t desire cleansing and a push-button control. Our only annoyance was needing to charge and put the battery pack in ourselves, which we found a bit fiddly. For the cost however, it does a decent task of vacuuming and deserves considering.

This is the most advanced device from the robotic vacuum professional, making use of the very same navigation technology Google puts into its self-driving cars. It utilizes lasers to scan the space it’s cleaning, keeping in mind any barriers then going back to the same spot from which it began, which can be beneficial for storage. It has good suction, the power of which can be increased by turning on the turbo mode (this increases the maker’s speed and noise, too). It didn’t get stuck on the large rug in the middle of our testing room, which was an issue for some. The app, offered for iOS and Android gadgets, means you control the vacuum’s actions from anywhere you are, whether that be the workplace or the supermarket.

Purchase now 5. iRobot Roomba 980: ₤ 849.95, John Lewis iRobot’s Roomba is probably the best recognized name in the robot vacuum market, and this is the very best design in the variety (with a price to show it, over ₤ 500 more costly than the entry level Roomba). It methodically browses multiple spaces, increasing or decreasing suction power depending upon which surface it’s cleansing– we discovered it picked up large pieces of fluff as easily as it did embedded dust. If the device lacks battery mid-clean, it will go back to the docking station then finish the cycle. It likewise deals with Google Home so you can now tell your Google Assistant when to begin, stop or dock the robotic. And if you desire to avoid a particular space or location, the 2 virtual walls form an efficient barrier. Download the app to set up cleansing schedules on your phone, and watch on the development of the Roomba when you’re not around.

Purchase now 6. Vileda Cleansing Robotic: ₤ 325, Amazon This is the cheapest device we tested by some way, which naturally indicates it isn’t as jam-packed with functions as its pricier equivalents. However that simplicity does sometimes frequently operate in its favour. Three buttons on the top of the machine– S, M and L– correspond to whether you want it to clean up a small, medium or big space, so you don’t need to worry about excessive shows. It will do well on hard floorings and short-pile carpet, however we found it struggled to manoeuvre over a large rug, left some embedded dust and was among the noisiest. For the price, nevertheless, this is a good entry-level device.

Hoover knows a thing or 2 about vacuum cleaners, and it has actually moved that knowledge into the robotic world. This machine is little and peaceful, but still handles to provide a terrific clean thanks to its reliable sweeper brushes and powerful suction, getting ingrained dust as well as bigger products. The cleaning pattern is extensive, but you can steer the device to a particular area utilizing arrow buttons on the accompanying remote. The app, available for iOS on Android, likewise enables you to manage the machine, in addition to established cleaning schedules. An efficient, well-priced choice.

This robo vac is the biggest of the bunch and looks like something you have actually probably seen avoiding Sir Killalot on Robot Wars. It does a great job of sucking up dust and fluff from carpet, and so it needs to for the cost. It’s robust, so will bounce off walls with no damage done to itself (or the wall) and is good at browsing around furnishings. There are an impressive 6 cleansing modes to choose from– auto, handbook, spot, point cleaning, turbo and dust sensor– and a remote so you can guide it to an especially dirty spot. There’s an app too, so you can manage it even when you’re not in your house. This robot deserves thinking about, although it does not quite match the Dyson 360 Eye on suction.The Verdict:

For the very best suction power, ease of usage and compact size, the Dyson 360 Eye is unsurpassable. If that’s a little out of your price range though, Eufy’s is a safe alternative, cleaning up dust and dirt while likewise effectively taking on difficult corners. IndyBest product reviews are objective, independent advice you can trust. On some celebrations, we earn earnings if you click the links and purchase the products, however we never ever permit this to bias our protection. The evaluations are put together through a mix of professional viewpoint and real-world testing.